FOR IMMEDIATE RELEASE: SAVE PEOPLE SAVE WILDLIFE ADVANCES WILDLIFE AND MOTORIST SAFETY IN CONJUNCTION WITH THE UTAH DEPARTMENT OF TRANSPORTATION AND THE SUMMIT COUNTY COUNCIL 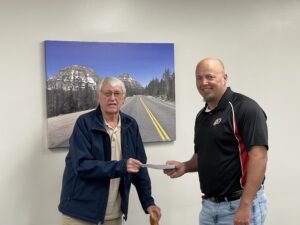 August 23, 2021, Park City, UT- On Thursday, August 19, 2021, Save People Save Wildlife signed their fourth contract with the Utah Department of Transportation (UDOT) to build an additional mile of wildlife fencing along I-80, brining our state closer to closing the gap between the wildlife overpass at Parleys Summit and Kimball Junction.

This represents the fourth mile of wildlife fencing Save People Save Wildlife, through the generous contributions of the community, has co-funded with UDOT.

“Since our founding in 2015, residents of Park City have come together to raise $168,000, of their own money to fund the additional wildlife fencing and wildlife escape ramps through our organization that help keep wildlife off our roads and direct them to use the Parley’s Wildlife Overpass,” said Ralph Hottinger, the President for Save People Save Wildlife. “We are still seeing large mammals such as elk, deer and moose failing to use the crossing, as they are traveling farther up the freeway, circumventing the overpass, and crossing I-80, causing wildlife vehicle collisions. Ensuring the construction of additional wildlife fencing will be crucial to the ongoing success of the Parley’s overpass, keeping both our wildlife and our motorists safe.”

Wildlife mitigation measures such as crossings and corresponding fencing are a blessing for Utahns.  Between 2008- 2017 there was an average of 3,110 crashes reported in our state with 2,756, or 88.6%, of those crashes resulting from collisions with wildlife. These wildlife vehicle collisions result in death, injury, and approximately $138 million annually in costs to Utahns. The addition of new crossings and corresponding fencing in identified wildlife vehicle collision hotspots will help reduce these dangerous and costly collisions.

Additionally, such mitigation measures are crucial to protecting the migratory paths of Utah’s native wildlife. If wildlife cannot move between habitats freely to find food, water, and mates, they will perish.

For example, the Utah Division of Wildlife Resources (UDWR), under the direction of  Secretarial Order 3362, selected 50 mule deer in the Kamas/ Chalk Creek area in December of 2018.

The selected deer were then fitted with GPS tracking collars to better understand their migratory movements. Unfortunately, the survival rate of these deer was extremely low with only half of the 50 mule deer surviving, causing UDWR to have to redo the study.

Many of the mule deer suffered from a lack of food and water, and those that tried to make it to greener pastures were killed on I-80. Only one of the collared mule deer made it across one of Utah’s busiest interstates in the Kamas/Chalk Creek area.

I-80 serves as a treacherous man-made barrier for wildlife, and implementing wildlife crossings will help reduce the impact such barriers have on the ability for wildlife to traverse their landscapes freely. In fact, a study conducted by the U.S. Department of Transportation found that one of the greatest threats to the survival of 21 threatened and endangered species nationally are wildlife vehicle collisions.

The importance of these mitigation measures can not be understated for the life and happiness of both Utah residents and wildlife. As such, Save People Save Wildlife has been successfully advocating for additional monies for these life saving measures.

On Wednesday, August 18, 2021, the Summit County Council adopted Resolution 2021-10, which will give the Summit County voters the opportunity to vote on the issuance of a bond not to exceed $50,000,000, to finance the acquisition of open space, conservation easements and the construction of recreational amenities and environmental and wildlife mitigation measures and related improvements this November.

Save People Save Wildlife, prior to the vote, advocated that wildlife mitigation measures be included in the resolution. SPSW commends the Summit County Council for its decision to include measures to protect wildlife habitat and wildlife mobility.

Although the resolution still needs input from Summit County voters on November 2, 2021, the resolution comes at a timely manner as a recent poll conducted by the College of Colorado found that 89% of Utah voters believe elected officials should find the money to protect our state’s land, water and wildlife.

“Utahns are starting to see the benefits of wildlife crossings and other wildlife mitigation measures that help keep our roads safe,” said Hottinger. “We commend UDOT and the Summit County Council for listening to the voices of Utahns everywhere and investing in these critical mitigation measures that help protect the migratory paths of our wildlife and save the lives of our residents, both two- and four- legged.”

About Save People Save Wildlife

Save People Save Wildlife (SPSW), a registered 501(c)(3), was founded in 2015 by a group of local residents who were alarmed by the number of wildlife-vehicle collisions taking place along the gateway to Park City, I-80. Save People Save Wildlife has engaged in extensive advocacy efforts, including an ongoing key partnership with UDOT, which includes raising $168,000.00 from generous donors and community members for four miles of wildlife fencing near the Jeremy Ranch Exit, which then stimulated acceleration the construction of the wildlife overpass bridge at Summit Park and installation of cattle guards at Summit Park and Jeremy Ranch exits. Learn more at www.savepeoplesavewildlife.org