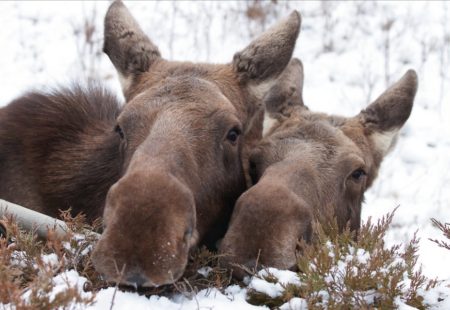 Save People Save Wildlife (SPSW), a registered 501(c)(3), was founded in 2015 by a group of local residents who were alarmed by the number of wildlife-vehicle collisions taking place along the gateway to Park City, Interstate 80.

At that time, the fencing from Summit Park through the Jeremy Ranch Exit was in disrepair or, in some cases, non-existent. There were no cattle guards at Summit Park on or off-ramps.

Because this corridor is – and always will be-a natural migratory path for wildlife, it meant that moose, deer, elk and other animals had only one option to use as their migratory path:  walking directly across the freeway in the path of vehicles traveling at rates of well over 70mph.

After countless collisions were reported involving large mammals and vehicles traveling at freeway speeds, we feared it was only a matter of time before it would result in human loss of life.

SPSW members were determined to advocate for safety measures along this dangerous corridor. We began meeting with the Utah Department of Transportation (UDOT) and Summit County and soon learned that there was limited funding available that would keep the motorists and wildlife safe.  This is when we began to advocate and fund-raise for wildlife fencing along I 80 where Federal and State projects failed to adequately address.

Save People Save Wildlife has engaged in extensive advocacy efforts, including an ongoing key partnership with UDOT, which includes: